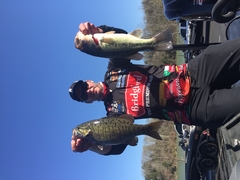 The Lake Cumberland area had received a lot of rain and unusually cool temperatures the two weeks prior to arriving. This had the lake up 5 feet above full pool and dirtier than usual. However, starting in practice and going throughout the tournament weather conditions were going to warm up with little to no rain. This had the fish in a variety of stages but primarily prespawn and waiting to move up.

My first day of practice I targeted smallies and crushed them everywhere I went on a jerkbait and a swimbait. I easily had 20lbs and was excited to fish smallies. However, I spent the next two mornings chasing them and had different results with the bite getting tougher each day. I think there was a few spawners up shallow that we’re finishing up and each day they continued to leave the beds without a new wave pulling up.

I spent the afternoons of the last two practice days looking for largemouth and found a steady bite on a spinnerbait fishing transition areas into spawning locations. Since I had patterns for both species I decided I would start targeting smallmouth and fall back on largemouth if I needed to.

The first day of the tourney I ran to my best smallmouth area and to my surprise had very little action. I managed one 15 inch smallie and that was it. I decided to leave after 1 1/2 hrs. and try a set of points I had action on since it was on the way to my largemouth area. On these points I did catch three more keeper smallmouth but only one 2 3/4 lber that ended up getting weighed in. At 10 AM I switched to largemouth and did manage to catch about 10 keepers all in the 2 - 2 3/4 lb. range. Unfortunately, the two biggest bites I had did not make it into the boat. I ended up weighing 12 lbs. 4 oz. and was tied for 61st place.

On day two I decided I would hit the smallmouth points again first thing since it gave up several fish the first day. To my surprise I only managed one smallie that was barely a keeper. So after an hour I pulled the plug and went after largemouth. On my third cast I caught a 2 3/4 lber and told my coangler we were doing this all day. It turned out to be a really fun day of fishing since I caught about 25 keepers, had lots more bites and had them dialed in. But for some reason the big bites eluded me and I couldn’t catch anything over 2 3/4 lbs. with most of the keepers being 2 - 2 1/2 lbs. By the end of the day I had a limit weighing 12 lbs. 14 oz. and moved up one spot to finish in 60th position and get the last check!

I’m not sure why I didn’t get the better quality bites that I had seen in practice, but I really enjoy fishing Lake Cumberland. It’s a beautiful lake filled with lots of bass.